Skip to content
Case Granlund: Digital implementation of the strategy for +1000 people organization 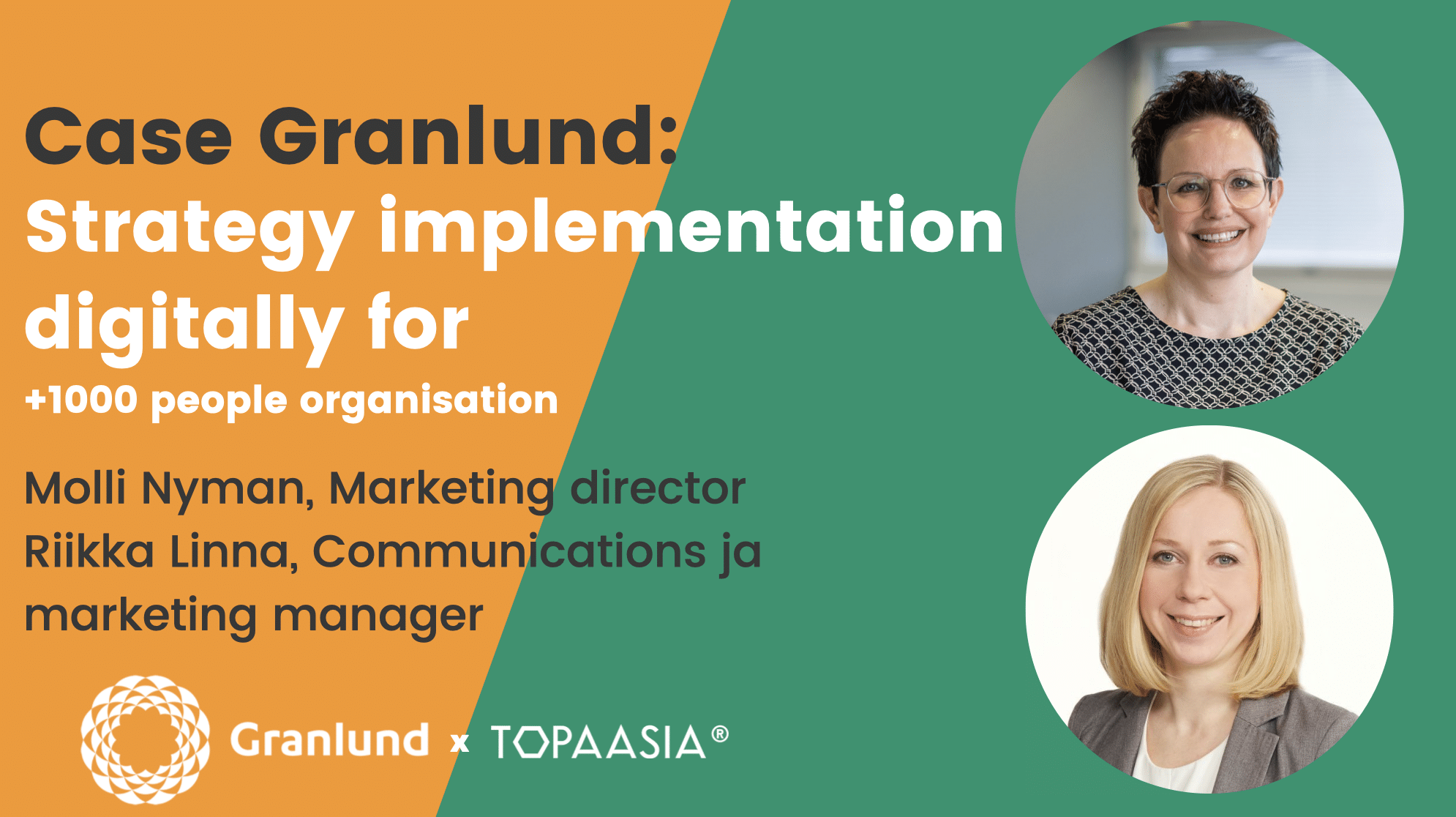 Granlund is a Finnish group of real estate and construction experts that employs more than 1,200 professionals throughout Finland. Granlund used Topaasia in 2021 to implement strategic communications and this customer story is an in-depth part for previous customer experience video. In this interview, Molli Nyman, Marketing Director of Granlund, Riikka Linna, Communications and Marketing Manager at Granlund, and Suvi Juopperi, Assistant at Granlund’s Rovaniemi Regional Company, talk about how the strategy was implemented remotely during 2021 with Topaasia and what results were achieved.

We wanted to solve these problems with smart, easy and modern tools. We didn’t want to do the implementation just with Powerpoint presentations, we wanted people to go through things in groups in a way that strengthens teamwork and takes things into everyday life. So we wanted to facilitate the conversation around the strategy, ” Molli Nyman describes the initial situation.

“In the previous strategy period, we experimented with different facilitation methods and more traditional group discussions, in which one format was a discussion based on strategy material. It didn’t take a breeze, so we wanted a new tool on how to get people to talk and how to make the strategy part of everyday-life. Then we bumped into Topaasia”, Riikka Linna adds. 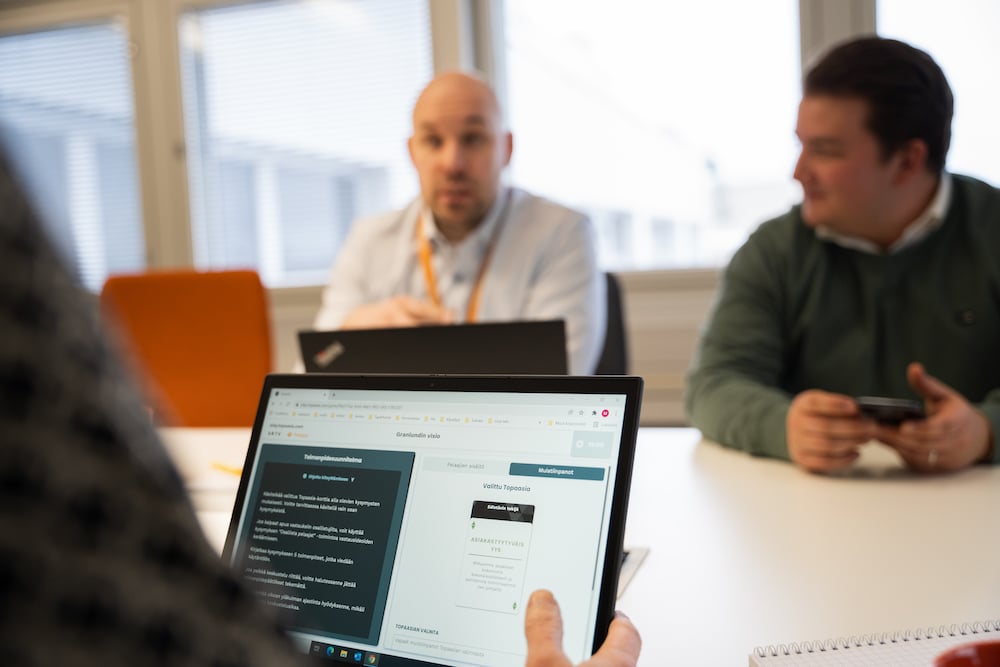 The role of Topaasia in the strategy process

“Our strategy was completed just as corona struck. However, we were in a happy situation because we had already opted for a digital way of working for implementation. Topaasia was not only seen as a means of implementing the strategy, but it also supported communality and the development of a spirit of togetherness in remote setting. It has been a means of having dialogue in everyday life where encounters have been less frequent”, Molli says about the use of Topaasia in Granlund as part of the implementation of the strategy, to which Riikka continues: 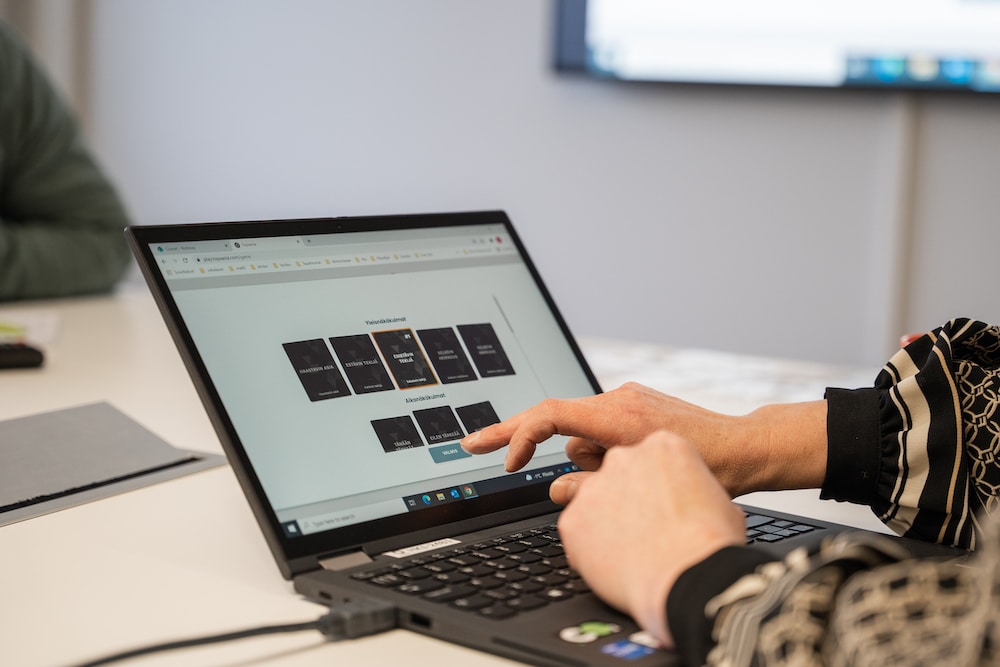 “In the beginning we created a Plan G strategy game to ensure that discussions are held on issues relevant to Granlund. After that, we chose three themes that we wanted our staff to play about. The topics covered were vision, customer relationships and productivity”, Riikka describes the strategy implementation process.

The implementation of the strategy started with the training of supervisors. Each supervisor participated in the training of strategy communication, which explained what it is, why it is important and what levels it is important to consider. Afterwards, the supervisors played a practice game with Topaasia, through which the tool became familiar first from the participant’s point of view, before facilitating the games in their own groups.

“The teams played three game sessions at Granlund during the year, for a total of 272 sessions. The game rounds were started by notifying the supervisors of the start of the round, the topic of the round was announced and the use of Topaasia was recalled. After that, the groups played on their own schedules” Molli describes.

The game adapted to the needs of each group other than in terms of scheduling. For example, if the supervisor did not want or had time to facilitate game sessions, it was possible to name someone else on the team for this role. In some Granlund subsidiaries, all games are facilitated by the same person.

“Our plan to use Topaasia was based on coaching supervisors, actively communicating and making the process as easy as possible. In addition, we had incentives for groups to play games on schedule. The idea of the extra carrot was to motivate people to try the tool and create a spirit of competition”, Riikka adds.

The process of implementing the strategy changed as it progressed. The contents of the games played after each round were analyzed in collaboration with Topaasia. The analyzes revealed what had been discussed in the games and what measures the groups had drawn up on the basis of the discussions. The results of the game rounds were discussed with the management, and the topics for the next rounds were decided on the basis of these.

“A huge number of different development proposals emerged from the content analyzes. With the feedback and analysis from each round, we selected one Group-wide development target. The content analyzes were valuable because we got the staff’s opinion on them to confirm which things are important to them , ”Molli describes. 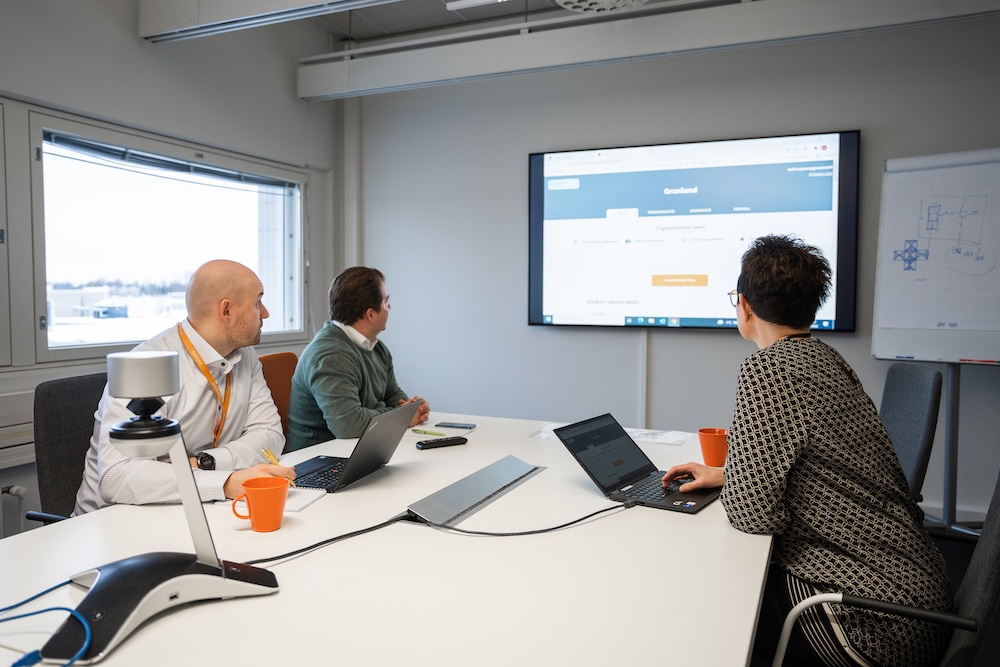 Experiences from the implementation process

1. Based on the collected feedback, the implementation was considered successful. Feedback was collected from the groups that played at the end of the process, and about a third of groups provided feedback.

“In the end of Topaasia session the team agrees on measures to be promoted at the group level. 94% of the responding groups had promoted the agreed measures. It’s alot! When one third have contributed almost 100% to the measures, one can be very pleased with the results, ” says Riikka.

“The groups discussed topics that are operational and important for advancing the strategy. For example, the groups considered measures to improve customer service, share information, streamline project practices, and improve use of tools and processes. Taking care of coping and maintaining a spirit of togetherness also became clear. During remote working, discussions were also important for the groups from the perspective of cohesion, ” Riikka describes.

“One group ended up promoting project practices. This had not been identified as part of the strategy, although it is a good practical example of improving productivity. Many of the issues discussed by the groups have been precisely the measures to take the strategy forward on a day-to-day basis.”

3. The inclusion of the game and the reflection on the group’s activities in general were also felt positive.

“From the point of view of the group, it is good that everyone gets their voices heard and their point of view in the game. Some are louder and more talkative than others, but here everyone is allowed to share their own point of view. As an absolutely positive lift, this has brought the people together in the remote era”Molli describes.

4. The same themes were raised in the feedback received from staff:

Topaasia is the best tool we have used so far to implement the strategy. An excellent conversation starter. The ready-made topics were perceived as a good thing, ie the participants did not have to think about what to say themselves, but the cards helped and gave topics for discussion. 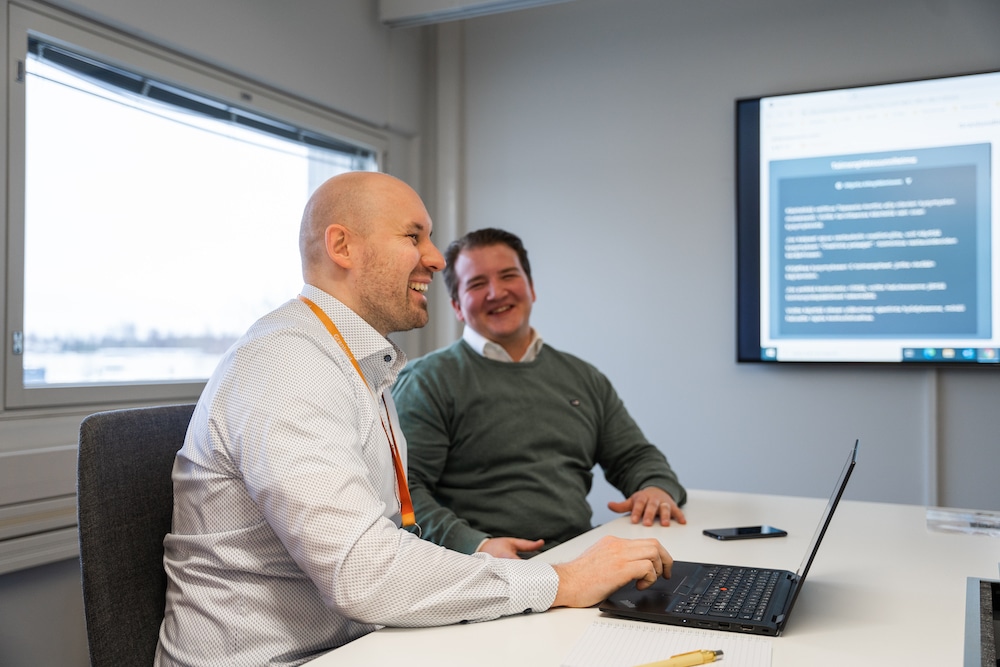 “I was responsible for leading the Topaasia game sessions in Granlund Rovaniemi. We have electrical and plumbing departments in the unit, a total of about 20 people.

The games were easy to set up and facilitate from the facilitator’s point of view, the interface was handy for both the facilitator and the participant. Organizing the games was also easy.

I think the game format helped to keep the team motivated for the strategy discussion and to take the discussion seriously. The gaming platform and the cards themselves sparked discussion, and there was no need to encourage people. Everyone got to tell their own opinion, and the cards supported when needed.

The games lasted about an hour, during which a discussion was sparked, concrete ideas were developed and responsibilities were agreed upon. A lot of new development ideas were generated from the game sessions, and information was shared. With the help of the mixed groups, the perspectives of the discussions diversified and the games arose to both department-specific and unit-wide development targets.

In terms of strategy, the idea of gaming was to make the staff aware of the strategy. It succeeded and got concrete stuff to do on a daily basis that leads towards the goals of the strategy. Examples of concrete actions are e.g. reviews of completed projects, as well as in-house presentations on services and offerings.

Gameplay is especially good in Topaasia. Everyone was excited to be able to participate on the phone themselves and to come up with concrete development ideas. Usually, the discussions related to the strategy are perceived as fine words and not as much practice, but through this we reached concrete practical development ideas. I recommend it! ” 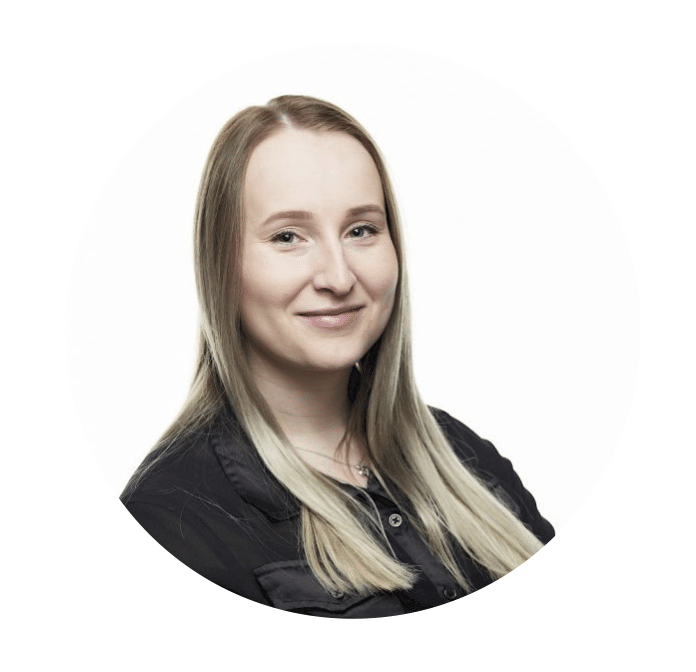 Finally, would you recommend Topaasia for strategy implementation?

“I definitely recommend. A really good tool for facilitating discussion. Especially when you don’t want to communicate one-way, but want people to discuss and reflect on things together. The digital entity works well remotely., ”Riikka reflects.

“I recommend. I am satisfied with the chosen tool. It has lived up to expectations and been a positive experience overall, ” Molli concludes.

Thank you Molli, Riikka, Suvi and all the people of Granlund!