The Five Dysfunctions of a Team (2002) is a leadership tale written by organizational consultant Patrick Lencioni about teamwork and what things usually go wrong in teamwork. The book is written in the form of a story about the management team of an imaginary technology startup. Only the last twenty pages are more traditional business literature in sense of practical problem-solving. The book is quick to read and offers solutions to those interested in the challenges of teamwork.

At Topaasia, we read this book among the founders and decided to write about it because of the universality and importance of the subject. The topic is close to our gamified dialogue service: Topaasia. In the course of game sessions, you can identify team dysfunctions according to what you dare to talk about and what team doesn’t bother to talk about.

The Five Dysfunctions of a Team 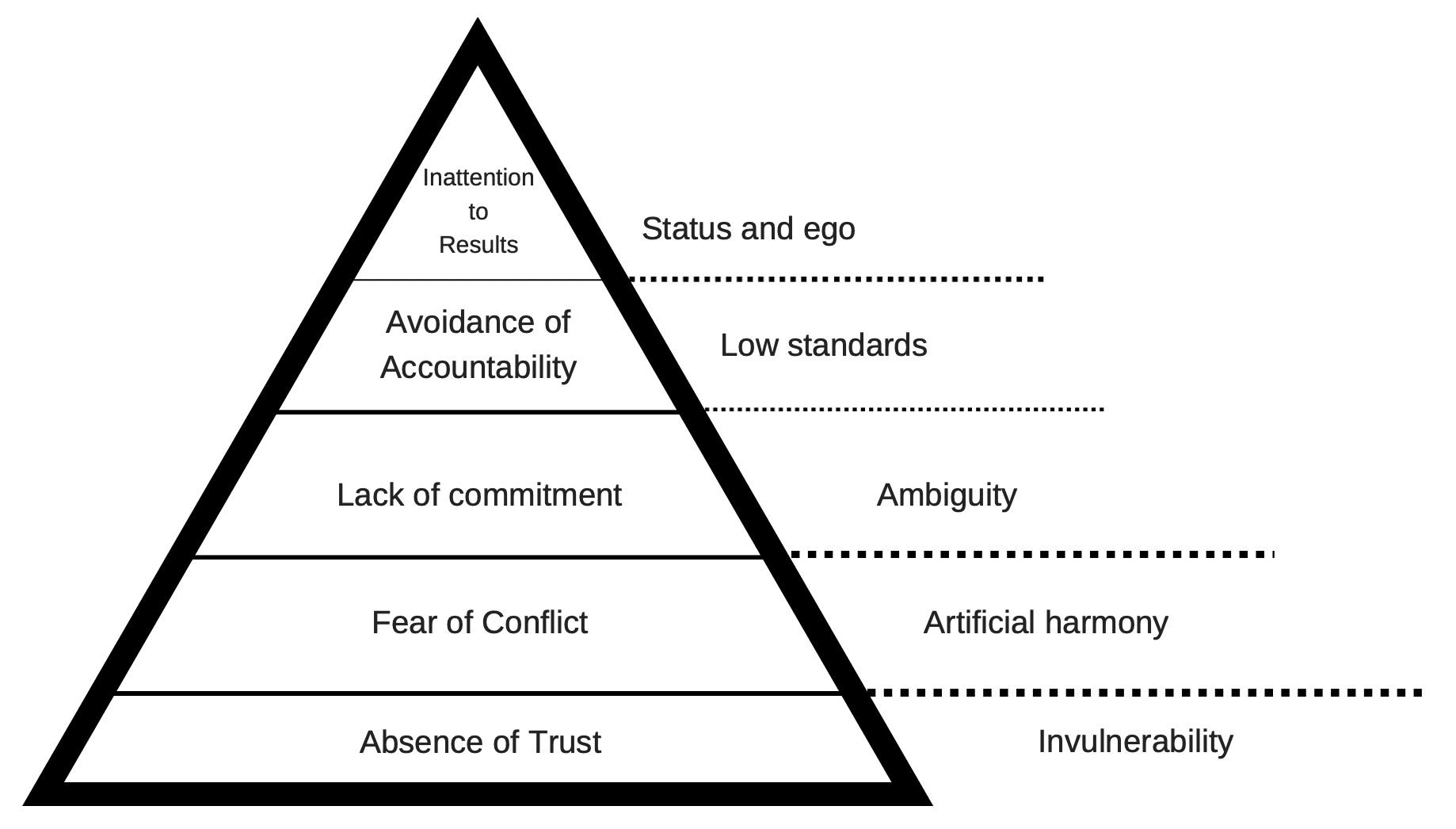 The picture shows the team’s five dysfunctions and their manifestations on the right.

Lack of trust means team members don’t trust each other and don’t dare to be vulnerable close to each other. Team members are not helped, help is not dared to be asked, free brainstorming is not possible, nor is giving feedback.

In the story of the book, the team begins to build trust by sharing personal stories about themselves that remind the other team-members that each of them is a real person, and not “just working here”. There is much more underneath the “work-me”. One way we use and suggest to build trust and learn about the personal stories of other team members is to write a learning agreement. A learning agreement is a self-assessment method introduced by Cunningham (1995) that asks simple questions:

Fear of conflict is reflected in the artificial harmony that is often present in the early stages of a new team. We do not dare to say development suggestions directly to others, nor do we dare to give or ask for feedback. Everything is seemingly fine. Following Katzenbach’s and Smith’s team performance curve theory, this could be called the “pseudo-team” phase.

Fear of conflict may be present in a longer-running team if the team is not accustomed to bringing difficult topics to the table and dealing with them. This leads to avoidance of responsibility and indifference.

What to do about fear of conflict?

According to Lencioni, first, the team needs to understand that conflicts are a healthy thing and not something to avoid. Second, one of the team members may be assigned a role as a digger of conflicts. In this role, the task is to bring to light the issues of the team that are rubbing or not agreed upon. The third thing is to remind people when a conflict arises that people have permission to have a conflict. 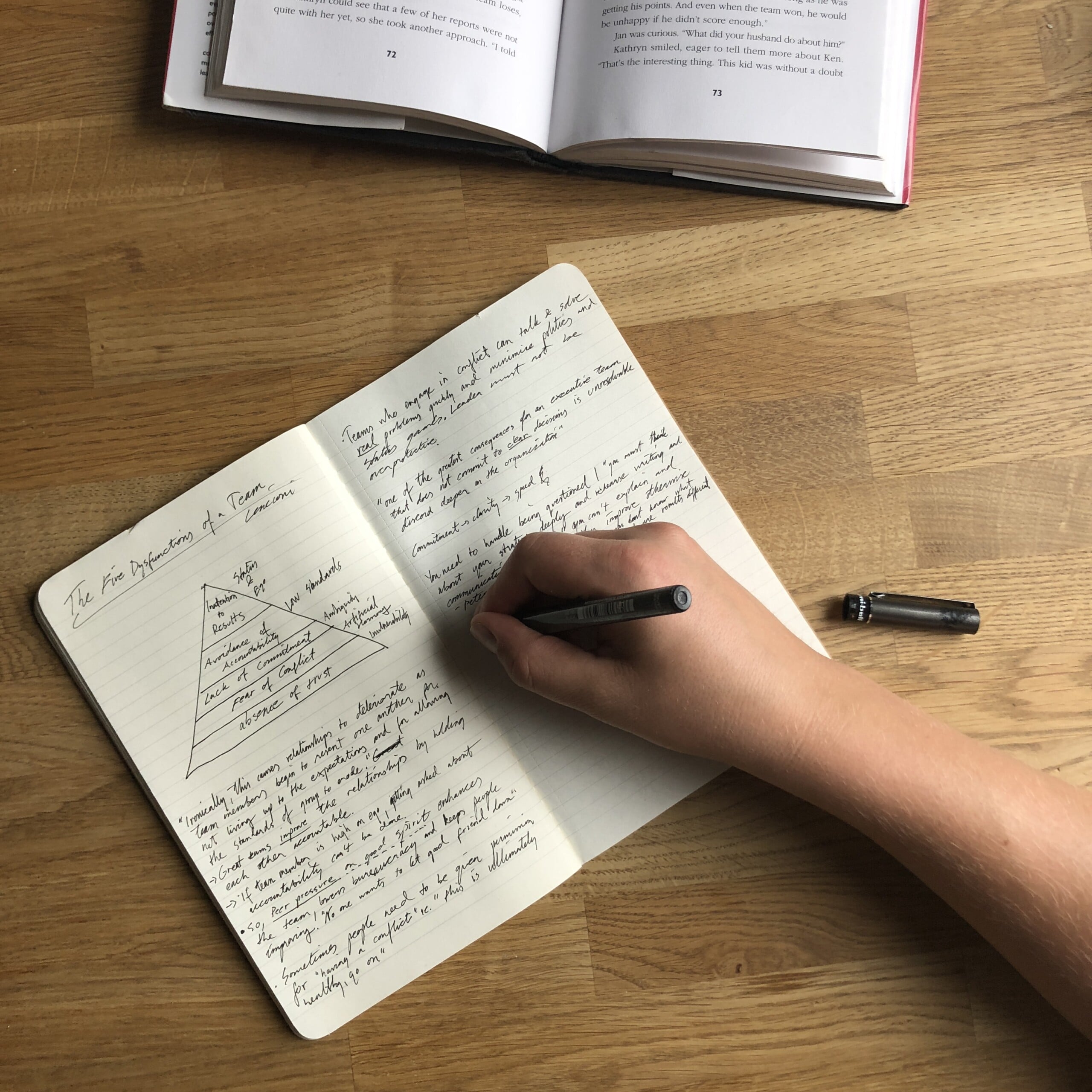 According to Lencioni, the lack of commitment is due to too much consensus and reassurance. Reducing consensus does not mean that not all team members will be heard in decision-making. Instead, clarity of decisions should be sought and the need for certainty reduced.

One way to achieve clarity:

One way to eliminate over-assurance:

One way to talk about responsibilities is to display a scoreboard of essential metrics in the team’s office. The Four Disciplines of Execution – book suggests that you should focus on just a few essential metrics and measure them. There are two types of metrics:

It is a good idea to measure commonly agreed lead metrics on a daily basis and discuss the results and changes that appear in them from time to time. In the longer term, it’s a good idea to look at delay meters. 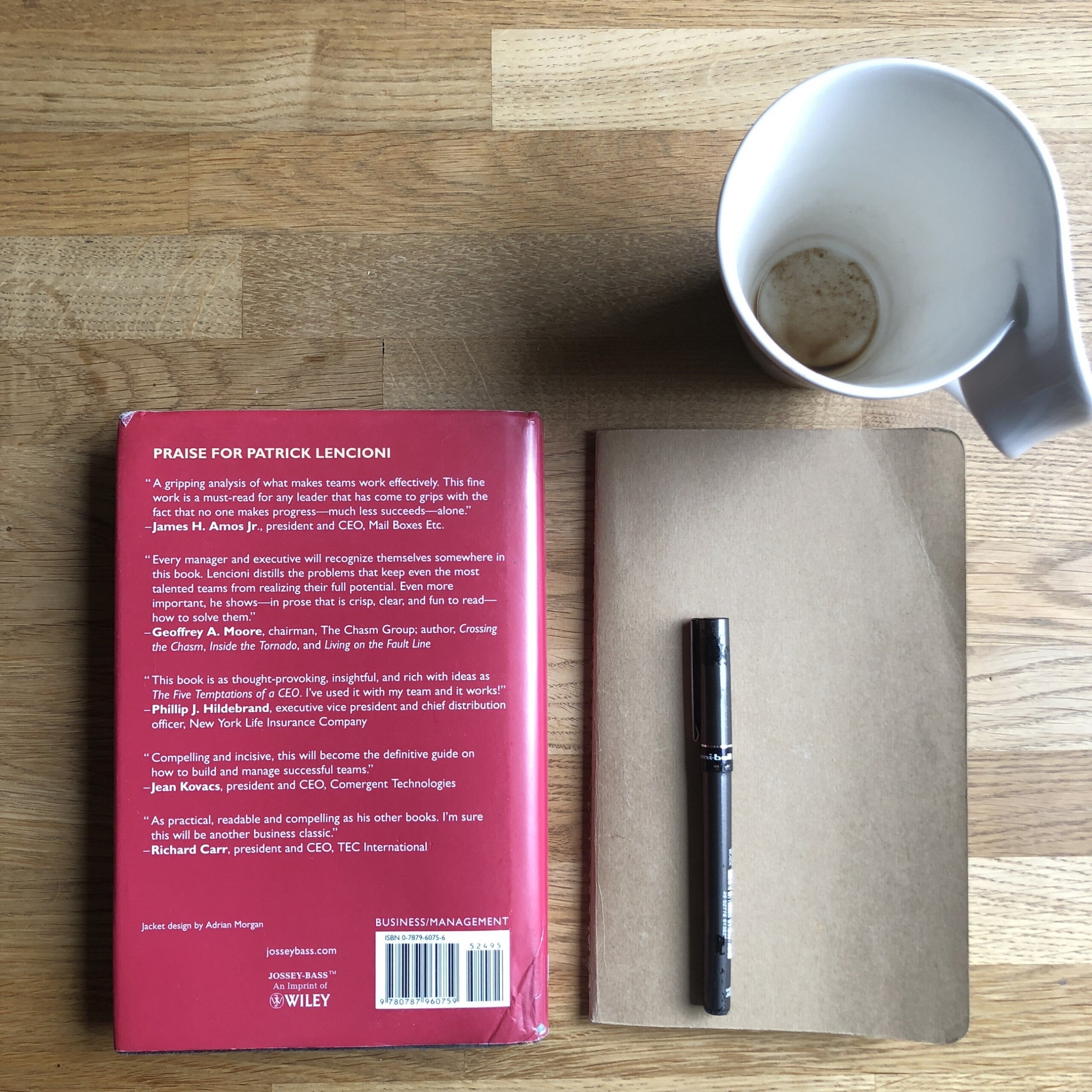 In this dysfunction, team members put their own personal success, reputation, and honor before the team’s results. According to LencionI, this is the team’s main sin. A good team member must be able to put the commonly agreed goals before personal goals. Some team members don’t care about team results because they are content about status and an image to belong to a particular team . Another reason for the indifference to results is that the team has not learned to be results-oriented, but views its activities more as a struggle to survive.

Ways to get your team focused on results:

WHAT ELSE CAN I DO TO HELP TEAM OVERCOME DYSFUNCTIONS?

In summary, the proposals made in Lencioni’s book:

Our own additional suggestions:

We don’t believe any single tool, method, or coaching magically creates trust between people. Trust builds from our experience over time working together and that team members behave trustworthy. However, as our team grows and remote work increases, eating our own dog-food in playing Topaasia games helps to discuss dysfunctions in a short period of time. Fear of conflict, in particular, is often overlooked in a game session at the beginning of joint workdays, as the game allows people to bring out the things that are bothering them. 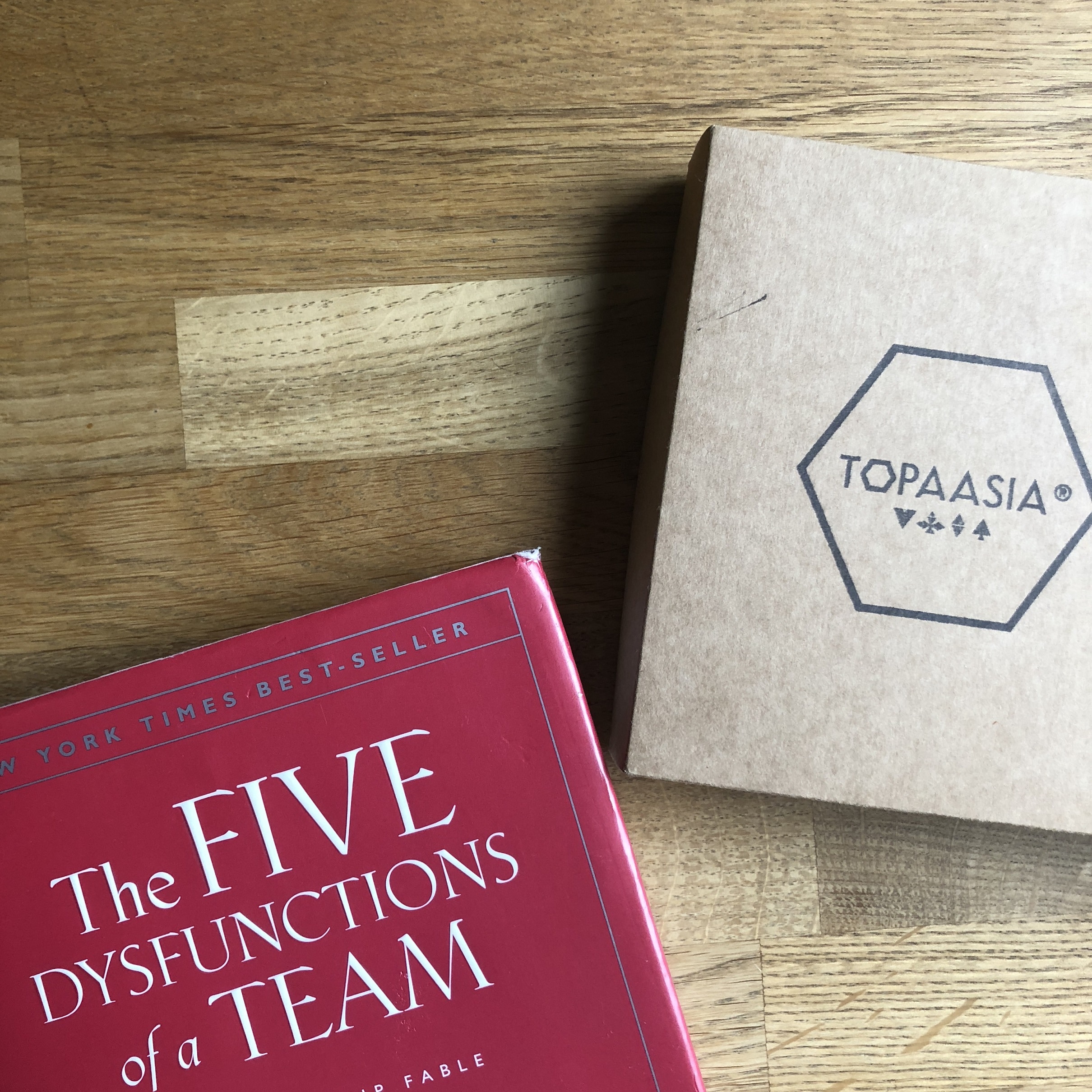 You can buy physical Topaasia games directly from our online store.
You can try digital Topaasia for free by starting the 14-day trial period
Read how Judith Mills Consulting used Topaasia to help their customers with Five Dysfunctions framework

You can also communicate directly the way you want: